Review: The House Of Hades by Rick Riordan 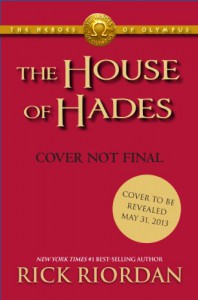 This review can be found at Scott Reads It!
Note: A finished copy was provided to me by Disney-Hyperion in exchange for a honest review of this title.
Rick Riordan is one of the reasons that I became an avid reader years ago, discovering The Lightning Thief at a local library was an everlasting treasure. I may have changed as a person in that time period, but my love for Riordan's books hasn't waned one bit. In fact, I believe The House Of Hades is Rick Riordan's best book to date and that Riordan's incredible writing abilities are furthered with each successive book. Riordan knows what his fans want to read and The House Of Hades reiterates that idea again and again.


The House Of Hades succeeded at showing me how much Percy and Annabeth have grown since they first met at Camp Half Blood. Unlike the previous installments in The Heroes Of Olympus, The House Of Hades is a complete throwback to the original Percy Jackson series. In their years at Camp Half Blood, Percy and Annabeth banished many of their foes to Tartarus by slaying them. It was really interesting to see Percabeth interact with familiar faces from previous books in such a hostile environment. There is a huge focus on past foes, I really wished I had re-read the original series before reading HoH.
I applaud Riordan for making such a bold decision to transport our favorite couple, Percy and Annabeth to Tartarus. This was such a risky move on his part because there are so many ways in which this could have went wrong. Needless to say, Riordan recreates Tartarus in such a terrifying manner and proves how skilled of a writer he is. Having the book take place in Tartarus was a perfect way to show how much Percy and Annabeth's relationship has matured. There are tons of perfect, heartwarming interactions between the duo that readers will swoon over. It's really easy to see why fans are heads over heels for Percabeth because they are simply perfect for each other.
I strongly believe that The House Of Hades has the strongest character development that I've seen recently. In previous books, I really liked Hazel, Frank, Leo, Piper and Jason but I didn't fall for them like I had with most of Riordan's other beloved characters. I really never felt so strongly towards such a large ensemble of characters. I empathized with each and every one of the characters in HoH, even Coach Hedge (which is an incredible feat). I really appreciated how Nico became a major player in this book, in my review of Mark Of Athena I complained about the lack of his presence. The "Nico" chapters were heartbreaking, touching, and absolutely groundbreaking. I loved seeing a completely new layer of Nico, I need more of Nico in Blood Of Olympus.
Though HoH is nearly 600 pages, I zoomed through the book much quicker than I thought I would. Riordan really knows how to engross readers with humorous, witty dialogue. I have never laughed so much while reading a fantasy novel. There is an endless abundance of action scenes and tension throughout HoH that will keep readers turning the pages. I am so glad that we have another Heroes Of Olympus book coming out next year because I'm not ready to say goodbye to this series.
House Of Hades is definitely my favorite Riordan book so far and I really look forward to seeing how Riordan tackles Norse mythology next. My love for House Of Hades is truly boundless, this is one of the best books of 2013 by far. For all those who have never read a Riordan book, you are missing out on some of the best middle grade books ever written.